← A BABY of a Post.
All Good Pirates Gotta Get a Little Booty. →

You know who had the world’s most awkward funeral?  Architect Louis Kahn is who.  You know why?  Because that’s where his wife, his two mistresses, and his three children met for the first time.  WOOPSIES!  Ok, probably they didn’t meet.  They probably just avoided eye contact.  But the point is, they were all there.

But before we get to the good stuff, I have to make a little disclaimer about this post: Lou Kahn is my favorite architect.  Granted, I could probably only name you, like, 4 architects.  But the point is, I have a really big boner for the architecture of Estonian-American modernist and notorious baby-daddy, Louis Kahn.  And you’ll see why.  Because we’re going to take a mini tour around the world to catch Kahn’s greatest hits — and I don’t just mean his bitches.  Just shut up and indulge me, will you? 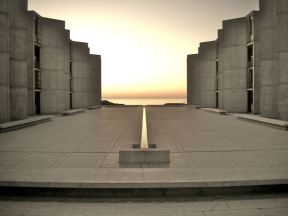 The Salk Institute in California. I know. I just had an architecture orgasm, too.

The Library at Phillips Exeter Academy. Unfair that rich kids get their stupid prep school education AND sexy architecture. Fucking greedy. (Also in the hometown of our Internets Adviser/bf of LHB, DMK).

Kimbell Art Museum in Forth Worth, Texas. Shhh. I know. It is amazing. You know, he wanted to make it look like cattle stockyards from the outside so it would interact authentically with its surroundings. BRILL.

We’re going to sort of breeze through Kahn’s early life (when he immigrated with his family from Estonia in 1906, moved to Philadelphia, worked as a piano player for silent films, drew pictures on the streets for extra cash, and burned his face with an apron full of hot coals when he was 3 that left scars on his face forever) and skip to the part in 1930 when he finally finds a nice Jewish girl to settle down with, Esther Israeli.  In 1940, they have a little girl named Sue Ann.

No one else is going to say it, so I will. He was NOT a looker. But he was charismatic as fuck and an artistic genius. Plus he probably had a GIANT penis. (Im a fucking poet.)

TANGENT: Did I mention that Louis Kahn is For Shame!’s first latke-loving perp?  Well, let’s just take a quick moment to call attention to the fact that this big-nosed builder is the first member of the tribe to grace the pages of our little blog.  That’s right, in honor of Passover (why not?), we’re bringing you a special story of circumcised scandal!  BUT I DIGRESS.

Moving on.  After a rough stint in the 30s and early 40s of not getting any work except commissions from a few fellow yids in Philly, Lou gets an offer to teach architecture at Yale.  And he’s like, “duh” and takes it.  A couple of years later, he gets an offer from UPenn and lectures there until his death in 1974.  He didn’t design too many buildings for being one of America’s most cherished modernist architects.  But that was kind of what was so awesome about him; he designed, like, 6 famous buildings or something and all of them are considered masterpieces.  The point is that throughout his life he was mostly known and admired in the field of architecture education.

We all know you can’t be great at everything, but you know what field he especially sucked at?  Being a husband.

Here’s why.  Aside from not being so great with money (uncharacteristic of our people, I know) and being in debt just about all the time, he also had a couple of passionate love affairs that sort of maybe resulted in him raising 3 separate families instead of the typical 1.  (The whole 3 families thing might have had something to do with the debt, if you ask me.)

Anne Tyng in the foreground with Lou to the right and behind her at the offices on Spruce Street in Philadelphia.

In 1954, he had a daughter named Alexandra with Anne Tyng, a young architect who worked at his firm in Philadelphia.  And in 1962, he had a son named Nathaniel with a collaborator landscape-architect, Harriet Pattison.  Nathaniel grew up to be a really good roller-blader and filmmaker, who made a documentary about his father called My Architect.

I suppose the whole having three families thing never really erupted into a huge scandal, so maybe it isn’t entirely the stuff of For Shame!  But mostly it wasn’t scandalous because Esther was very tight lipped about the whole thing, even after Lou’s death, and never made a big fuss about it.  The three women knew about each other the whole time, though, and lived within a few mile radius of one another. Which must have made the midnight drives back to wifey’s house pretty convenient for girlfriends #1 and #2.  What’s weird is they all probably shopped at the same grocery store.  The kids probably chased the same ice cream truck.  If the women had been friends, though, it would have been just like Jewish Sister Wives.  But they never spoke.  And Kahn’s obituary understandably only stated his wife and first daughter as his survivors.

Kahn died of a heart attack at the age of 73 (when his youngest child was 11…so he was 62 when Nathaniel was born.  gross.) in the public bathrooms at Penn Station in New York City.  He had just returned from a trip to Bangladesh where he was finishing up the National Assembly rooms and was at Penn to take the train back to Philly.  It took police 3 days to identify his body because he had crossed out the address in his passport.  Mysterioso?  I think so.

In his documentary, Nathaniel Kahn talks about seeing his half sisters for the first time at the funeral.  How’s that for a family reunion! OY VEY, that would have been uncomfortable!  I would not have wanted to be the officiating rabbi at that funeral.

So even though it doesn’t seem like a BFS (Big Fucking Scandal) because Esther was a nice Jewish girl who kept her mouth shut, you better believe that having three goddam families (2 of them secret) in the 50s and 60s WAS a BFD (Big Fucking Deal).  This architectural mensch was a bold motherfucker, getting what was his one baby-mamma at a time. Oh yeah, and like, defining American civic modernist architecture while he was at it.  Not saying he was a great guy, he clearly was not the best husband (or boyfriend, for that matter), but he and his buildings have inspired countless architects (and probably adulterers) and remain some of the crowning achievements, masterpieces even, of American modernism.

I have to stop typing now because my boner for this man’s architecture is getting in the way of the keyboard.