Hawaii: Where it’s Okay to Lei Your Sister.

Break out the tiki torches and mom’s Malibu rum, because For Shame is about to get real tropical. And real scandalous. INVERSELY SCANDALOUS, in fact. But more on that later.

This is Matthew Fox. He is in Hawaii. I want to go to there.

alphabet, poi. So many wonderful things to be had.

And one of the most interesting things about Hawaii is its complex royal history. Only four states were independent nations prior to joining the home of the brave/land of the free – Vermont, California, Texas (typicallll), and you better believe it, HAWAII! And not only that, Hawaii is the only state to have been a motherfucking kingdom before William McKinley came in and annexed that shit right up just to be a douche (and probably also for other legitimate political reasons). I’m not saying that McKinley’s assassination was deserved (Kahma’s a bitch, am I right?!) but I’m also not not saying that it was deserved.

But I’m getting a little ahead of myself. Let’s head back to 1810, when the eight main Hawaiian islands were unified under Kamehameha I, who was the first monarch. He had a ton of kids (being a royal and doing it right) and that’s where we begin our INVERSELY(!) scandalous tale of royal lovin.

This portrait was painted during midnight premiere of one of the Harry Potter films, judging by the cloak and wand. Guess what, y'all: he's a Gryffindor!

Our hero, Kauikeaouli, was Kamehameha’s second son. His big bro Liholiho took the throne as Kamehameha II when papa Kam died in 1819; Kam II died in 1825 in London on a diplomacy trip after catching measles.

Which left young Kauikeaouli King of Hawaii at the age of 11. Upon ascending the throne, his name became Keaweaweʻula Kiwalaʻo Kauikeaouli Kaleiopapa Kalani Waiakua Kalanikau Iokikilo Kiwalaʻo i ke kapu Kamehameha. Just rolls off the tongue. The history books call him Kamehameha III, but even that’s too long for me and my digital-age attention span, so I’m going to call him K3.

K3 was sort of a loose cannon. When he was a kid, his stepmom acted as Queen Regent and was a huge Puritan. John Winthrop would have been proud. K3 was faced with a choice: Should he respect his stepmom by buying into her Western Jesus nonsense? Or should he honor the awesome traditions of his people? I can only speak for myself here, but even if you just look at the fashion, it’s an easy choice. Modest bonnet or grass skirt? Black scratchy wool dress or coconut bra? High ruffled collar or lei?

But K3, respectful young man that he was, had a hard time deciding. And in response to his anxiety, he did what any young (seriously, he was 11) person of means would do: he got smashed.

You can't tell, but he's wearing a grass skirt in this portrait.

The mayor of Oahu was a close family friend and was moonlighting as a liquor store owner, and he hooked our boii upppp with the finest tropical beverages. More Mai Tais than you can imagine. All the Bay Breezes you could ever want. Obviously, an endless Blue Hawaiian river. Actually, K3 wasn’t a middle-aged woman so it was probably just rum and malt liquor. Either way, his drinking subverted the shit out of his stepmom’s Puritan ideals.

And oops, she acted as his regent until he was eighteen! So needless to say, there was some tension in the Royal Hawaiian Palace. Anyway, she died in 1832, and K3 was free to rule.

Quiz time!
Q: When a young man ascends the throne of any nation in history ever, what’s the first thing he should do to make sure everyone calms the fuck down?
A: Find an appropriate lady, marry her, and knock her up, STAT. Repeat as necessary.

K3 was no dummy. He knew what he had to do. And if you recall, he was really into honoring Hawaiian heritage.

And according to ancient Hawaiian traditions, the best way to keep the royal bloodlines so fresh & so clean was to marry other royals. Other Hawaiian royals. From an isolated chain of islands. On which there was an absolute monarchy. Which can only mean one thing…INCEST!

Now, this wasn’t any of that FDR/Eleanor fifth cousin-once removed bullshit incest. This was brother-sister, Flowers in the Attic incest. And among royals, this kind of incest was not only acceptable to the public at large, it was sort of the best possible thing that could happen to the royal bloodline. 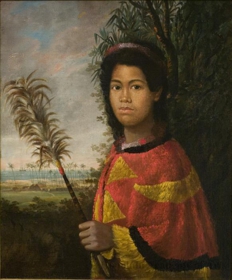 Nahienaena and the Royal Feather Duster.

So K3, good king that he was, wanted to do things by the ancient Hawaiian book. And he thought, “Welp, this feels a little weird, but my grandparents were also half-siblings, and they were fucking great. Hmmmm, who could I marry? Hey, my sis Nahienaena has been looking FINE lately. And she’s fucking marriageable as shit. And I always liked when we played with blocks together as kids. BOOM, Queen chosen.” Plus, according to many accounts, Nahienaena was also in love with him.

Now get out your old Calc book, because it’s INVERSE time!

K3 and Nahi were all set to tie the knot and get down to business (the business of babymakin’). The bridesmaids’ grass skirts were being fitted, Nahi picked out a beautiful white satin Swarovski-encrusted coconut bra, and the whole island was gearing up for what promised to be history’s most bitchin’ luau/wedding reception. But remember K3’s Puritanical stepmom? She’d invited all kinds of Christian missionaries (haha it’s also a sex position, you guys) to the islands during her lifetime, and most of them stayed along and still had some measure of influence in court. And those missionaries DID NOT like the whole incest idea.

So they flagged what would have been a lovely, happy marriage, satisfying to the bride, the groom, and a lot of Hawaiian subjects. They even found K3 another less-related woman to marry. She was the daughter of the governor, she was hot, and she was wicked smaht, but the heart wants what it wants. K3 pussyfooted around for two years(!) until prospective wife number 2 died. Then the missionaries found him a Chiefess to marry, but she was the daughter of a sea pilot (ie commoner), and K3 said, “Okay missionaries, I see your poor second attempt and I’ll raise you an education requirement.”  He demanded that the Chiefess undertake years’ worth of schooling to match his intellectual prowess. You know what they say: never engage in a battle of wits with a Hawaiian. That’s the saying, right?

Meanwhile, K3 and Nahi were getting their bone on. You might be squirming a little bit. I get it. But they loved each other and it was normal according to their heritage which is more than you can say for a lot of royal fornicating. Anyway, Nahi got knocked up and gave birth in 1836. And K3, badass that he was, said “Hey fuckers, this is my kid, I love him, he’s royal as shit, and he’s going to be my heir whether you like it or not.”

K3, his wife, and their nephews. So much joy.

But then the baby died a few hours after birth. And Nahi died a couple months after that. I just fucking turned the tables of sympathy, didn’t I?

K3 was left all alone. And the missionaries won. So K3 was like “Fuck it, bring me the dumb Chiefess. Let’s do this.” And the Hawaiian people were absolutely pissed that these missionaries would fuck up centuries of tradition. But they were married and had two kids who died before reaching adulthood.

And therein lies the inversion: he wanted to be with his sister, and the Hawaiian people were scandalized when he didn’t/couldn’t marry her.

Kamehameha III went on to rule Hawaii for almost thirty years. He’s known as one of its greatest kings, he oversaw a switch from absolute monarchy to constitutional monarchy, and his biggest goal and success was in balancing Western ideologies with ancient Hawaiian customs. He was sort of a great dude. Herman Melville (who based a book on K3), didn’t think so, but he was an ass (Not really, he was awesome. But wrong about our friend).

Ultimately, this is the story of a man who said, “Aloha,” and then sadly, “Aloha,” to personal happiness. Sure it was incest. But it was socially acceptable and hoped-for incest. And you can’t fight a love like that.